I’ve got an embarrassing and shameful secret, something I’ve been keeping from my friends and work colleagues. Something that a Countryside Ranger , of all people should be in control of. I think they suspect   ; there ‘s been strange looks in the corridor and conversations cut short as I walk into the room.
It’s something I thought I could deal with myself in private without outside help . I thought that was the best way , I thought I was strong enough.... I was wrong.

First it was just one then it was more than one and before I knew it , it was out of control. I don’t want you to think that I did nothing , I did try ... god knows I tried, I put hours in trying to stop it , last year I thought I’d got on top of it , I got cocky I suppose and that ‘s when it really took hold .

Well it’s time I faced my demons and came clean , so that you don’t  have to go through what I’ve been through , the skeleton in my cupboard, the shameful secret I’ve been trying to hide is   ......Himalayan balsam   it’s all over the bottom of the garden thousands of massive  plants with pink blousy flowers and then tens of thousands of seeds. There I’ve said it , and I feel much better now  that I’ve got it off my chest. 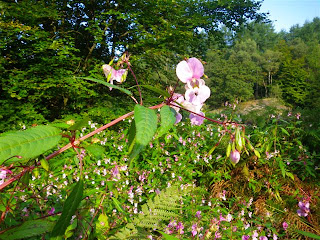 It’s a plant that is familiar in the British countryside introduced in 1839  by well meaning and curious Victorians they thought this exotic heavily perfumed pink flowering  plant  originally from the Himalayan mountains would look good in the garden . It did indeed look good in the garden but unfortunately it didn’t stay there ! This aggressively mobile plant has spring loaded seed cases that can fling the seed several metres and it thrives in almost any soil type . This means that it can ‘walk’ out of gardens  , along railway lines and down river banks where it grows in balsam stands,  tens of thousands strong out competing our native flora , by shading it out and taking its moisture. 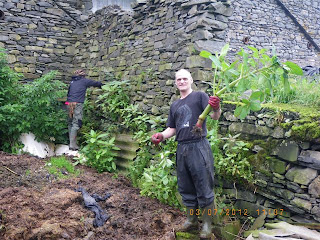 For the last few years the National Trust ,  with hundreds of volunteers has been trying to eradicate this invasive species from our land in the Windermere catchment . We have been quite successful, I myself have lead volunteer groups pulling  balsam plants up by the roots . This makes my garden , one of the few remaining Himalayan balsam refuges on Trust land around Lake Windermere, something as I mentioned that is a bit embarrassing and not something I’m proud of . I have spent hours in the garden ,last year and this , pulling the plant up , but once the bracken has fallen over it forms a protective layer under which the balsam grows eventually poking its head up into the light to flower and seed . I am now involved in guerrilla warfare with it,  waiting for it to show itself and then pouncing on it and pulling it out or cutting the heads off it. It’s a battle that I think I am slowly winning now, I’ll find out for sure next year.

If Himalayan balsam is  ‘ The Terminator’ of the plant world , an aggressive survivor that simply can not be stopped , then the touch- me- not balsam , our only native balsam  , is a bit more  ‘Mr Bean’.  It’s a nationally scarce plant found in the Lake District and North Wales, with an attractive yellow flower. The plant generally grows in small numbers in damp glades in woodlands and appears to be demanding in terms of light and moisture, it requires ground disturbance to spread. Balsam stands will grow and spread and then for no obvious reason ; disappear . We are lucky to have a good number of these balsam stands on our property in the south lakes  and now is a good time to find them in our woods . 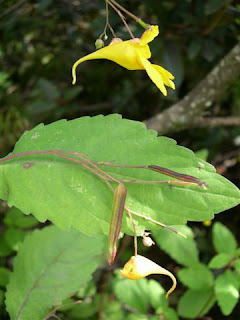 This unpredictable plant is also special because it plays host to a very scarce moth ,the caterpillars of the Netted Carpet moth, rely solely on this plant for their food . So the future of one is tied inextricably to the survival of the other. 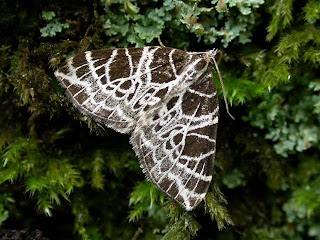 This is why at this time of year we are to be found on our hands and knees inspecting the underside of  leaves , looking for the small green caterpillars that will eventually become netted carpet moths. A job not made easier by the fact that the caterpillar is camouflaged and looks exactly like the seed pod and stem of the plant ! 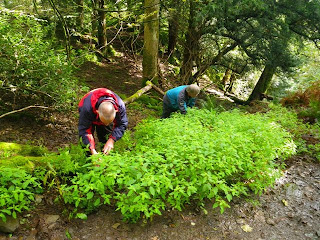 As a result of some careful management  , grazing with cattle in some of our woods and  the spreading of seed , the number of plants  and moths are increasing . A significant success story for our native flora and fauna.