This week's countryside blog comes from the Upland Ranger team based in the South Lakes area.

"Crest is best" is a catchy little phrase that was introduced to the team recently by Richard Fox, Fix the Fells Ranger for the Lake District National Park Authority. This phrase nicely sums up the approach we would ideally like walkers to take on two upland paths that we have been working on over the last few years.

The projects in question are Swirral Edge and Striding Edge, two iconic routes to the summit of Helvellyn. These have been joint projects and we have worked alongside both the Western and Northern teams.

The main year for the work on Swirral Edge was 2013, although we have been back each subsequent year to continue the work.

On Striding Edge we started the actual project work in 2014. We continued the work this year and currently expect to return each year to carry out further work.

The key reason for the work we have been doing on these sites is erosion, the underlying problem that drives all of the work the upland teams do.  The erosion is damaging to the upland habitats and also unsightly. In addition material that gets washed down into the lakes and rivers below is damaging to those habitats.

The focus of our work has been some particularly bad areas of erosion that had developed on the sides of Swirral and Striding edges and also multiple routes on Helvellyn headwall at the end of Striding Edge.  These areas had been deteriorating with some becoming very unstable. In places these routes also seem more difficult or dangerous to negotiate than the actual arêtes.

Our challenge has been to stabilize the ground and prevent further erosion and hopefully give these upland areas a chance to recover.

We have used several techniques which have included using additional rock to stabilize parts and to disguise side routes.  We also carried out work to make any preferred routes clearer and easier to follow to try to stop walkers straying into problem areas.
Various other landscaping techniques have also been used to remove side route erosion along with specially mixed grass seed to help the vegetation recover and stop further erosion.
In summary, we believe that “Crest is Best” for a number of reasons, including:
-  the crest is rock and can withstand the repeated footfall of many visitors without an erosion problem occurring
-  the erosion is both damaging to the upland habitat and the lakes and rivers below
-  the sides routes aren’t necessarily safer as they are unstable and, in our experience, some of these routes are more challenging/dangerous than following the arête
-  there are rare flora in places on these edges and on Helvellyn headwall; the more people spread out the greater the potential damage to these

Based on the team's experiences, if people want to enjoy walking Striding or Swirral edges we suggest choosing the day carefully.  They are not nice places to be on wet and/or windy days and, even though we know the edges quite well, we would save the challenge for another day.

These projects have become favourites for some of the team members, the locations can be very atmospheric. To conclude this blog here are a few favourite Striding Edge images: 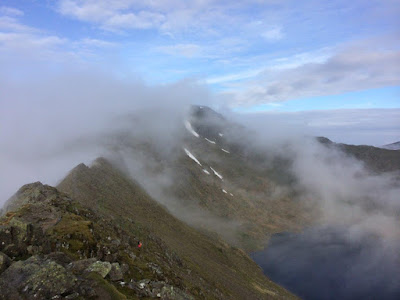 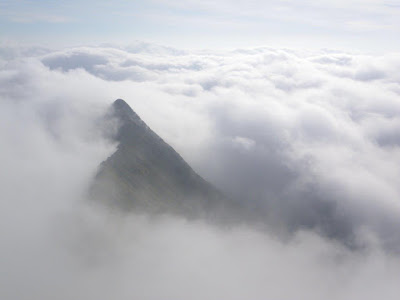 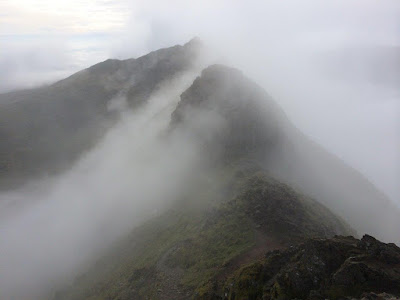 If you would like to know more about the daily work of the South Lakes Upland Ranger team they can be found on Twitter @NTLakesFells or for more about Fix the Fells follow this link: Fix the Fells