Who was John Muir?
John Muir was born on April 21, 1838 in Dunbar Scotland. He emigrated with his family at the age of 11 to Wisconsin in the United States. John would walk the fields and woods of the Wisconsin countryside, where he became more and more enchanted with the natural world.
In 1860 he enrolled at Wisconsin University, where he got good grades but after 3 years left to travel. In 1867 Muir suffered a blinding eye injury, which would change his life. When he eventually regained his sight, he devoted his life to the Natural world.

John turned more seriously to writing, publishing 300 articles and 10 major books that recounted his travels, expounded his naturalist philosophy, and beckoned everyone to "Climb the mountains and get their good tidings."
Muir's love of the mountains gave his writings a spiritual quality and his readers were inspired and often moved to action by the enthusiasm of Muir's own unbounded love of nature.

In one particular article, Muir drew attention to the devastation of mountain meadows and forests by sheep and cattle and as a result worked to remedy this destruction. In 1890, due in large part to the efforts of Muir, an act of Congress created Yosemite National Park. Muir was also personally involved in the creation of Sequoia, Mount Rainier, Petrified Forest and Grand Canyon national parks. In 1892, Muir and a number of his supporters founded the Sierra Club, the USA’s largest environmental organisation to protect the newly created national parks.

John Muir died on December 24, 1914 from pneumonia aged 76 but his legacy taught not only the people of his time but ours the importance of experiencing and protecting our natural heritage.

What is the John Muir award?
The John Muir Award was launched in 1997 and is an environmental award that encourages people of all backgrounds to connect, enjoy and care for wild places.

As part of the conservation challenge of the award, we were joined by year 9 students from John Ruskin School to help clear gorse from one of the rights of way. The gorse had become so overgrown in places that the path was becoming impassable. With the help from the two groups that undertook the task, the area is looking much better and we’ve had a great response from walkers using the path and how good it was to see young people getting out and making a difference in countryside. Refreshing comments if I may say so myself. 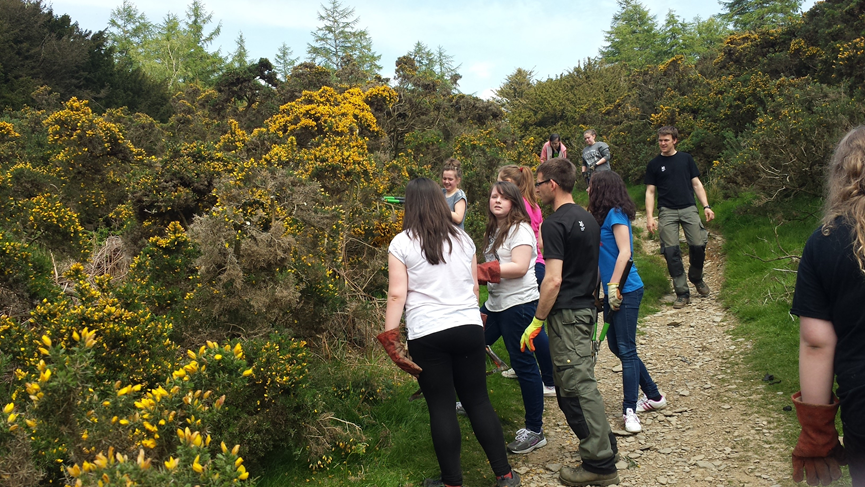 Students assessing where to start?
Gorse (Ulex europaeus) is a member of the pea family and can be found in all kinds of habitats from heaths and commons to towns and gardens. It generally flowers from January to June. Gorse is a large, evergreen shrub covered in needle-like leaves and distinctive, coconut-perfumed, yellow flowers during the spring and summer. Gorse is an important shrub as it provides shelter and food for many insects and birds, such as Dartford Warblers, Stonechats and Yellowhammers. Gorse however, can quickly become invasive in an area, forming dense, impenetrable stands if not managed. 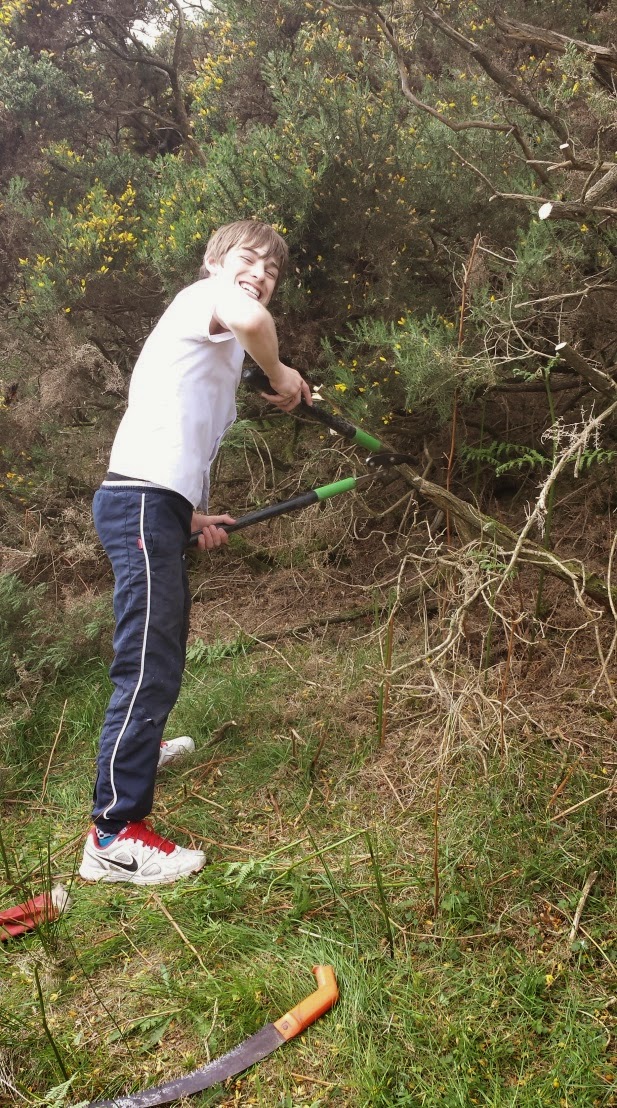 Having fun with the loppers

We have planned several other days with the School, with task to remove the never ending amount of rhododendron in some of our woodlands.

I have found some inspirational quotes from John Muir, hope you like them as much as I do;

“I only went out for a walk, and finally concluded to stay out till sundown, for going out, I found, was really going in.”

“Camp out among the grass of glacier meadows. Climb the mountains and get their good tidings. Nature's peace will flow into you as sunshine flows into trees. The winds will blow their own freshness into you, and the storms their energy, while cares will drop off like autumn leaves.”

“Fresh beauty opens one's eyes wherever it is really seen, but the very abundance and completeness of the common beauty that besets our steps prevents its being absorbed and appreciated. It is a good thing, therefore, to make short excursions now and then to the bottom of the sea among dulse and coral, or up among the clouds on mountain-tops, or in balloons, or even to creep like worms into dark holes and caverns underground, not only to learn something of what is going on in those out-of-the-way places, but to see better what the sun sees on our return to common everyday beauty."
Posted by NT South Lakes at 15:40
Email ThisBlogThis!Share to TwitterShare to FacebookShare to Pinterest