Fungi season is upon us!

The Kingdom Fungi includes some of the most important organisms in terms of their ecological and economic role. They break down dead organic material, continuing the cycle of nutrients through ecosystems. Members of the fungi kingdom include yeasts and moulds as well as the familiar mushrooms.

Tree surveys are generally carried out at this time of year, as fungi are great indicators as to the health of the tree.

Honey fungus is the common name given to several different species of fungi (Armillaria). There are six Armillaria species found in the UK that live on dead and decaying woody material; only two of these are also able to attack living plants, killing the roots of woody and perennial plants. 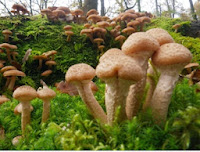 
The Shaggy Inkcap or the Lawyer's Wig (Coprinus comatus) occurs in meadows, woods and roadside verges. The young fruit bodies first appear as white cylinders emerging from the ground, and then the bell-shaped caps open out.

Edible Oyster Mushrooms are a great non-meat source of protein, rivalling beans and any other vegetable source. They vary in size, shape and colour, growing in shelf-like clusters on dead logs and living trees (primarily hardwoods, but sometimes on conifers). 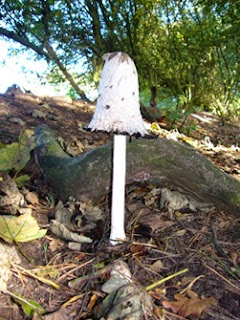 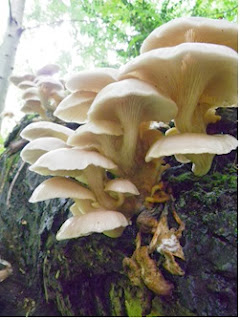 The common name Fly Agaric (Amanita muscaria) is a reference to the tradition of using this mushroom as an insecticide. In some European countries caps of Amanita muscaria are crumbled up and placed in saucers of milk to attract house flies. The flies drink the milk, which contains toxins - they are soluble in water and hence in milk also - dissolved from within the mushroom, and the flies soon become drowsy, collapse and die (or they simply drown in their spiked milk drink). 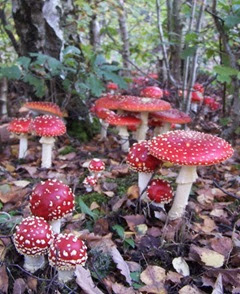 
Posted by NT South Lakes Rangers at 09:17
Email ThisBlogThis!Share to TwitterShare to FacebookShare to Pinterest