Take The Steps To The Station

This month the Path Rangers have been working on a footpath at Claife Station, which is on the west side of Windermere, near to where the car ferry comes across from Bowness. In one of the earliest guide books for the Lakes published in 1778 by Thomas West, the author referred to this site as special for its picturesque views of Windermere and the surrounding area. A decade or so later the Station or “Belle Vue” as it’s sometimes known, was built by the Rev William Braithwaite and at the height of its fame, the building was used for gatherings, dinner dances and tea parties.  In the late 19th century the Station had fallen from popular imagination and pictured below is how the building looks today.

One of the main access routes to the ruins is up a stepped path from Ash Landing Car Park and over the years some of the steps have fallen out and so the Path Team was called upon to try and return the steps to their former glory. The work involves taking out the old steps and re-setting them back into the ground. Hopefully the new work should allow easy access to the ruins for everyone to enjoy the views and the Station.

As far as worksites go, this has to be quite special. Below is a picture of the view from the steps.There are plans afoot to develop the whole site in the near future so watch this space for future developments.

Another task the team have been involved in is some upland path maintenance with the Fix the Fells Lengthsmen, doing a bit of a spring clean on the Nab Scar path just outside of Ambleside. Most of the work involved stopping short cuts on the route. The picture below shows the footpath on the right hand side and a short cut that has developed in the centre. Although it may not seem too bad a problem at the moment, if left, the scar could get worse with a heavy loss of vegetation to the side of the path. To solve the problem we try and encourage people back on to the original path line by blocking the short cuts.

Whilst working on the path we noticed this sheep on the photo below.It’s obvious the sheep doesn’t like the path or the surrounding green grass to walk on but prefers to get around on top of the dry stone walls.  I guess it has more options as to where the best grazing is.

Finally, our fleet of vehicles here in the South Lakes is currently undergoing a bit of a makeover and here is a picture of the first one to arrive back.  Look out for them on the road when you’re out and about in the Lakes. 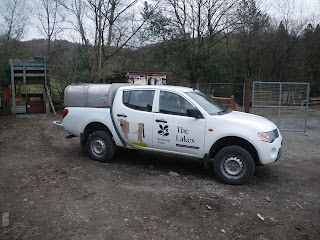