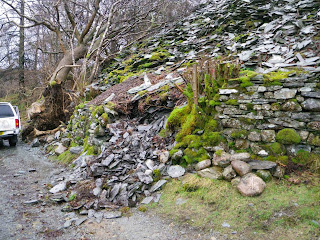 Two different tasks by the paths' team this week highlight the range of our conservation work in the local landscape.

An Industrial legacy
The first was repairing a collapsed retaining wall at Hallgarth in Little Langdale.  The gap itself was relatively small but the amount of stone it was holding back was VERY big! Part of the industrial history of the area, the pile of stone is old slate quarry waste that was dumped there over half a century ago and the wall was built to keep it in place.  We think the wall may have come down due to the tree that fell. Here it is before and after our work. 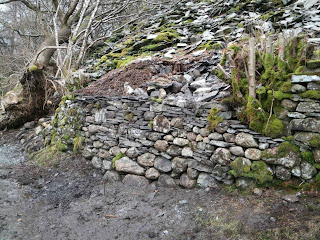 The hardest part of the job was removing the stone from where the wall had fallen because of the slate above continually filling the gap that you’re trying to clear.  The job reminded me of a certain kids' game that involves pulling out wooden blocks from a stack without it falling around you!

We managed to get the wall up without too many problems. Thanks to volunteers Glen and Trevor who gave up their time to help complete the job.

Influencing where your feet go
Now the snow has disappeared we were able to get back to the regular maintenance of the upland path network.  We re-visited a footpath we worked on over a year ago in Langdale at the very appropriately and splendidly named Hell Gill. Here it is before and after. 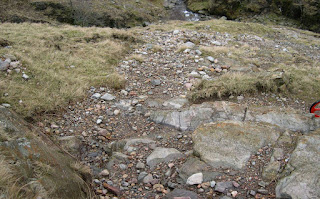 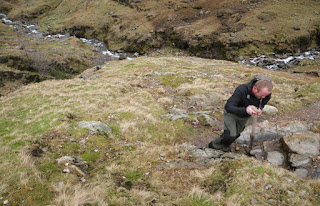 On one of the steeper sections, people were short-cutting the path and so eroding the hillside.  We worked on trying to get people back on to the path using subtle methods and as you can see we’re now winning the battle here. One down, plenty more to go!