Our annual Mountain and Rivers day with Hawkshead primary school. 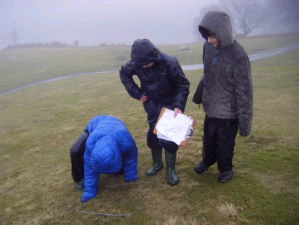 This saw us guiding the children round our Coniston and Little Langdale patch with them undertaking practical survey tasks along the way.

Firstly the children measured temperature, wind speed, elevation, and carried out flora and landscape surveys in their own school grounds. Leaving the school and visiting Tarn Hows, and Side Pike in Little Langdale the children were able to do the exercises again and compare and contrast what they had seen, and talk about the differences between the sites visited. It was also a good opportunity for the children to see and understand the impact humans have had on the landscape over the centuries.


Next came rivers. We stopped at two locations, to measure width, depth and flow and compared the findings between the two sites. For staff and children this mini-beast survey is the best part, as using nets and trays the children have to identify what they find in their nets. 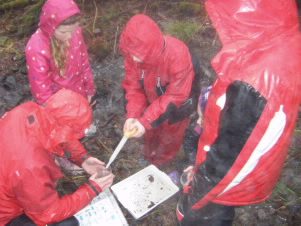 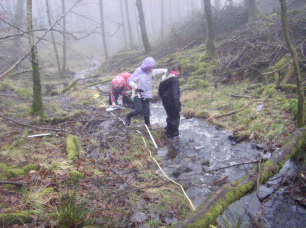 Also on the agenda was archaeology. We visited Ting Mount in Little Langdale (this is a very important archaeological feature and was a meeting place or local parliament for Viking settlers); Side Pike (the site of an ancient axe factory); and Copt Howe in Langdale (it has rock carvings between 2000 and 4000 years old.)

Although the Lakeland weather with wind and heavy rain was not kind to us these are Cumbrian children, and well used to it! - their spirits were high and a good day was had by all.