The South Lakes upland footpath team have been hard at it Fixing the Fells this year, whilst on our travels we've encountered wild weather, mountain mists, a healthy dose of hard working volunteers and one or two foot paths.

We've had projects running all over the Lakes and helped out some of the other teams too! Here's a rundown of some of the jobs we've been getting up to.

Threshthwaite Cove is a beautiful quiet valley (if not a little windy at the best of times!) situated near Hartsop.

Thresthwaite is a very damp place indeed and the path suffers a great deal from flowing water and foot fall. Above we have tried to define a path line and re-vegetate the damaged areas.

Working with different volunteer groups we carried out work all the way along the valley including installation of rock stepping stones, path definition and drain building.

From time to time the upland teams like to help each other out, earlier in the year we had the chance to go to the dramatic wild west-ern fells to work on Sca Fell Pike.

Brown Tongue is a popular route up England's highest mountain and can be incredibly busy all year round. To reduce erosion and help accommodate the vast numbers of feet on the hill the path from bottom to top (its a big path, trust me!) is being widened. In the picture to the right you can see the new and wider pitching merging into the older path which is soon to be replaced.

We have have been paying some attention to the hills surrounding the popular Grisedale Tarn. With many a hard working volunteer group and help from both the Western and Northern upland teams we've been landscaping out side routes and placing stepping stones over sensitive peat bog. And look here some kindly fellow has labeled the hills just in case!!

Below is a section of much needed pitching Nick put in near the summit of Dolly Wagon Pike. 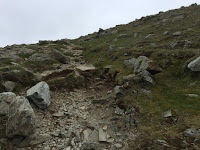 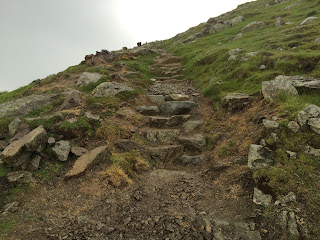 Helvellyn is an understandably popular mountain which on a clear day rewards anyone who ventures up there with stunning views of the whole of the Lake district and beyond to up to Scotland and the Howgills to the east. It's therefore unsurprising to hear that we concentrate a great deal of effort up here.

Striding Edge suffers a great deal of erosion along the sides of the crest of the ridge so it would be impolite for 'Fix The Fells' to not go and visit and chip away at the on going work up there.

To end the fell season we decided to do a bit of work in our own back yard and our focus turned to Goats Hause which is the col between Coniston Old man and Dow Crag. This project was funded by EOCA or the European Outdoor Conservation Association, you may have seen/heard coverage of this earlier in the year on the TV or Wireless! There is a huge amount of damage to the vegetation in this area so we have been using the usual techniques to reduce this.

The above drain finished is now being blended in with its surroundings. Below we are trying to encourage people to use a path line that will erode less quickly 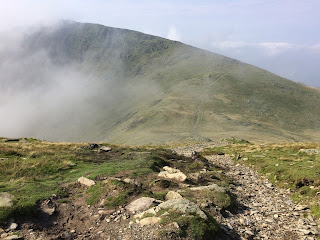 In the photo above, the path is relatively thin however it was three times as wide before the area to the left of the path was landscaped out.

So that's it for the fells for 2016 and next year's work plan is already in the pipeline, for now we're all having a well deserved break by getting on with some good old fashioned hard work down in the lowlands.

Posted by NT South Lakes Rangers at 08:47
Email ThisBlogThis!Share to TwitterShare to FacebookShare to Pinterest