Back in April, in my previous blog I'd written about how I was heading to the World Ranger Congress in Estes Park, Colorado. What a fantastic experience. I couldn't possibly describe everything I did, all the inspirational people I met or all the things I learnt in one blog so I hope I've managed to capture the essence of the congress for you.
I was honoured and inspired to have been chosen to represent the National Trust and the UK while learning about the war on poaching in Africa, how to connect the disconnected in the US national parks, how much of our terrestrial and oceanic environments has some form of protected area status and how we should protect much more, fire management in Australia and the campaign for better funding and health and safety standards in Asia.
On day one, all the countries represented paraded their uniforms and flags (there were 65 countries in all!). This culminated in a reading of the names of the 60 rangers to have died in service since the last World Ranger Day. A moment to be proud of the ranger profession but also to reflect on the dangers that some rangers face in the course of their work.
The congress was a strong reminder of why the work we do is so important, not just for nature but also for the human race. It was also a reminder of how small the problems are we face here in the UK can seem in comparison to protecting endangered species from poaching or communities from crocodiles. Some of the rangers I met are working in far less fortunate situations than my own. Some don’t receive the regular pay we all receive or even have a basic uniform or safety gear (There was a ranger relief collection to donate old bullet proof vests, uniforms and outdoor gear to those in need). However different it all seems, we are all fighting the same fight – protecting special places.

Sean Wilmore, the (newly re-elected) president of the International Ranger Federation highlighted how the 320+ rangers at the congress each represented 1000 rangers across the world. I really felt part of a big ranger family, especially now I have so many contacts around the world. Can you spot the National Trust rangers in red in the group shot? Chris Wood (from the North York Moors) and myself represented the National Trust's North region.


﻿The congress contained a series of very interesting talks, thought-provoking presentations and plenty of time to get to know our fellow rangers. Many of these talks would take a blog each to describe. One particularly inspiring talk was by ranger Christian Mbina of Gabon: "It is not a fight to save Africa. It is a fight to save the world." National Park Service director, Jonathan Jarvis, also gave a frank and heartfelt talk about the American National Park System - 'How do we engage the disconnected in our National Parks?' They are the future. Conservationist Harvey Locke, gave a talk thanking rangers for their important work and described his nature needs half theory - how we should protect more of planet earth.


﻿
Obviously a gathering of rangers would not be complete without plenty of fun too. Everyone brought parts of their cultures with them, the Brazilians brought their amazing dancing, the Russian's brought some interesting spirits, the British brought Yorkshire Tea....There was plenty of live music, a swap shop for patches and pins (I've now got quite a collection!) as well as daily raffles with prizes donated from ranger's protected areas (I wasn't lucky this time). I took part in a field trip to Gem Lake in the Rocky Mountains National Park with the local rangers. It was great to get out of a conference room for a day! 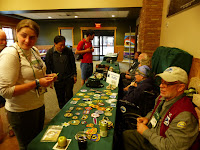 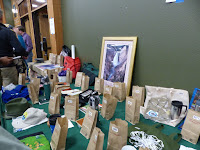 This was my first protected area gathering and I really hope it won’t be my last. The next WRC9 is in Nepal in 2019. I have started saving already.

Please check out the 8th World Ranger Congress YouTube channel to hear some of these inspirational talks, I particularly recommend the ones by Shelton Johnson, Harvey Locke and Jonathan Jarvis.

The Association of National Park Rangers in the US did a fantastic job of organizing and hosting the congress. This was in collaboration with the 100 year centennial of the US National Park Service.
Posted by NT South Lakes Rangers at 14:29
Email ThisBlogThis!Share to TwitterShare to FacebookShare to Pinterest
Labels: adventure, rangers, USA, World Ranger Congress, World Ranger Day