Winter – The Arrivals and Departures lounge

I can’t believe that we are deep in the midst of autumn already, this year has flown by. I’m sure they’re making these years smaller than they used to; just like Wagon Wheels and Curly Whirlys, and Cadburys Crème Eggs for that matter!

Each year  in the Lake District, as well as bringing a stunning palette of colours, autumn brings a range of  arrivals and departures in terms of wildlife. These migrations are brought on by changes in the daylight hours and climate, not just in this part of the country but across the whole of Northern Europe. These changes mean that certain food sources become more scarce, vegetation and water bodies become inaccessible due to snow and ice and wilder weather makes it desirable to find a more benign environment in which to spend the winter months.

A previous Ranger blog mentions the house martins that nest under the eaves  of the National Trust houses at Harrowslack next to Lake Windermere. The real start of autumn for me is when they flock together and decide to head South to Africa, usually connected to the first cold snap, the bitter winds from the Arctic North giving a taste of what’s to come. The signal for the house martins is the temperature drop but also the increasing scarcity of their food source; flying insects. 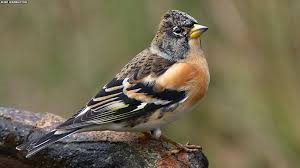 The departure of the house martins is followed in a few weeks by the arrival of Bramblings and Fieldfares, birds that migrate from Scandinavia  drawn to Britain by the relatively milder Winter climate (compared to Norway and Sweden!) and the abundant seed and berry crop from the likes of  hawthorn bushes and beech and rowan trees etc. Look out for flocks of these winter visitors in the parkland around Wray Castle. The bramblings look like chaffinches flying from beech tree to beech tree, the Fieldfares similar to blackbirds can be seen in the fields and around the hedgerows feeding on berries, worms and insects.

For me one of the most thrilling spectacles at this time of year is the sight and sound of flocks of geese flying in  V - formation overhead. Pink- footed geese  breed in Greenland, Iceland and Svalbard  in the summer, strangely, I always seem to see them flying North in the winter and South in the spring. I am assured that this is just the flocks making small movements to different  winter feeding grounds, the estuaries, marshes and coastal fields around Morecambe Bay and the Solway.

The V formation in flight  apparently helps create an updraft which reduces the resistance and helps conserve energy. 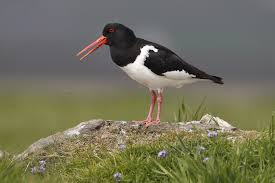 Oystercatchers are a familiar site on the shingle beaches around Windermere and Esthwaite Water; they have a less dramatic migration. Like Curlews in the autumn/winter they tend to head back to coastal areas; tidal beaches and muddy estuaries provide a more reliable source of food than inland.

So wildlife populations are always changing in the Lake District and there is always something new to see as the seasons change. Wray Castle is open at the weekends up until Christmas. Hill Top Shop and Garden is open every day (weather permitting). The countryside in the South Lakes is open all year round - regardless of the weather. We'll look forward to seeing you in 'arrivals' soon!
Posted by NT South Lakes Rangers at 11:04
Email ThisBlogThis!Share to TwitterShare to FacebookShare to Pinterest