I was watching a David Attenborough wildlife programme recently it was the one where the 6 week old zebra with its mum was trying to cross a swollen river  , a raging torrent of a  river populated by grumpy hippos and with lions on the far bank waiting to pick off the tired beasts as they scramble up the bank on the other side. It was shocking,  thrilling and dramatic stuff to watch .


Apart from making  me think how inappropriate the name ‘ zebra crossing ‘ is for  a safe place to cross  anything , I was also reminded that you don’t have to go to the African plains to witness this sort of life and death drama ; it’s going on all around us in the countryside and winter is a great time to witness these events. 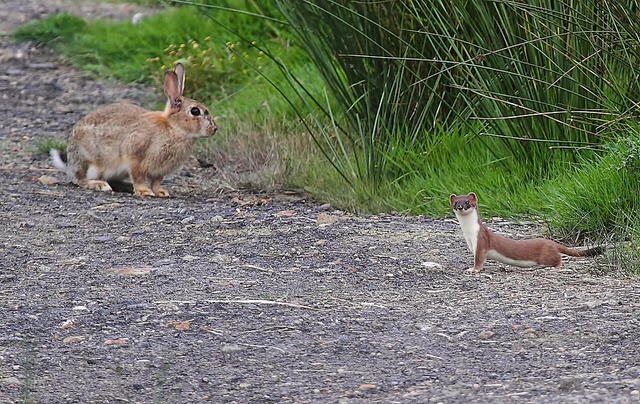 While walking along Wray Castle drive last week ,with some colleagues ,we heard a squeal from the field on the other side of the railings a rabbit was running at top speed towards us with a stoat in hot pursuit . Both rabbit and stoat were apparently oblivious to our presence.

The large rabbit being closely followed by the much smaller stoat with its long slender body and short legs looked a comical mismatch , like a  sausage dog  trying to bring down a red deer stag !

At least this would have been comical if it was a game of tig and not a chase to the death. The stoat  although much much smaller is very capable of bringing down the rabbit and killing it . The two did a figure of eight around us before disappearing back into the field .  We didn’t see the outcome, but let’s just say it can be long and very unpleasant for the rabbit !

A unremarkable hedgerow next to Hawkshead village seems an unlikely place for thrilling drama , but just before Christmas I could see a bird of prey giving an impressive acrobatic display  zipping from one side of the hawthorn hedge to the other , flying along at speed  and then darting back , the lack of foliage made it easier to see what was going on . A sparrowhawk , the most agile of birds of prey, was after a blue tit . The blue tit trapped in the hedge was flying along inside, using the thorny branches for protection , the sparrowhawk goading and threatening, trying to get at the tiny bird or scare it out into the open .

This deadly game of hide and seek went on for what seemed like ages , I’m sure it felt longer for the blue tit ,  but was probably over in less than a minute . On this occasion brains won out over brawn as the blue tit stayed put and the sparrowhawk lost interest or was scared off.


Rumble in the jungle

Probably the most titanic struggle that I have witnessed in the wild, while being a National Trust Ranger is that between a Great crested newt and an earthworm,  unlikely sparring partners I’m sure you’ll agree ! This ‘ battle’  took place in a small pond , under torch light,  on Claife Heights some years back ; the ‘rumble in the jungle’ if you like.

In the blue corner……  the great crested newt the largest of the British newts is an uncommon amphibian, a protected species, with its jagged crest along its back it looks like a mini dinosaur generally 10-14cm long , but pretty fearsome looking , it looks like it can handle itself in a fight !


And in the red corner ……… a worm a plump wiggly worm,  not really built for street fighting . Ladies and gentlemen ,place your bets please.

The ‘fight’ started with the newt bothering the worm and quite quickly devouring a third to half of its length , this should have been game over for the worm , but we underestimated the worms instinct for survival and what followed made for  compelling viewing , for several minutes the worm used the only weapon in its arsenal ….the wriggle….. it bucked and writhed for as long as it could, the newt not letting go , the worm tiring, stopped , rested and then started wriggling  again as though its life depended on it and indeed its life did depend on it . After maybe five minutes of this strange wrestling match, an unlikely outcome,  the newt  decided that there were easier ways of getting a meal and the worm, having never given up, broke free, and lived to wriggle another day.  Rocky would have been proud.

So turn off the telly, put on a coat  and get out there this winter. These amazing thrilling spectacles are available for free,  in high definition, in 3 D and with surround sound,  in your back garden, local green space or nearest bit of countryside.

Hawkshead village is worth a visit at any time of year , the Beatrix Potter Gallery in the village re-opens on Feb 14 2015, the Victorian gothic  Wray Castle located 2 miles from Hawkshead re-opens on 21 March 2015 but the grounds are open year round.