Inspired by gardener Pete’s themed musical offerings on the Hill Top blog, the South Lakes rangers have spent an unhealthy amount of time discussing ranger-themed music, and we’ve come up with some pretty good (and eclectic) Lake District playlists for our journeys in the truck – from Ain’t No Mountain High Enough by Diana Ross to Into the Valley by The Skids, and from Travis’ Why Does It Always Rain On Me? to Bob Marley’s Hammer (the perfect accompaniment to a fencing job).

I've been on my usual hobby horse, scouring my music collection for songs that reflect ecology as well as landscape, and sadly, haven’t found much.  Strangely, the only two I came up with are about the same species: salmon.

Neil Young’s Will to Love and The Chemical Brothers’ Salmon Dance couldn’t be more different in terms of style; the former was recorded on acoustic guitar on a tape deck  in front of an open fire, while the latter is a techno/hip-hop mash up (and features the odd bit of typically hip-hop language, so please be aware that it may not be suitable for work, children or sensitive ears if you choose to search for it).  They’re similar, though, in that they’re both bizarre pieces of music in which the salmon has a voice – Neil Young sings verses from the salmon’s imagined perspective through an underwatery vocoder effect, and ‘Sammy the Salmon’ provides guest vocals for The Chemical Brothers.

Will to Love by Neil Young on Youtube - external link

So, what is it about salmon that inspired these major musicians to write about them?  Well, as the songs show, they’re pretty incredible fish.  Sammy the Salmon tells his rapper friend that ‘all my peeps spend part of their life in fresh water, and part of their life in salt water;’ they have an intricate and awe-inspiring life-cycle, spending anything from one to eight years as juveniles (or ‘parr’ ) in the rivers where they're born – such as the Crake and Leven locally, and the becks above Coniston Water and Windermere.   (On a slight tangent, it's been suggested that symptoms of loneliness have been observed in salmon parr, giving a whole new dimension to Will to Love, which as well as featuring the thoughts of a salmon, develops into Young's meditations on love and relationships and finally seems to consolidate the two in a surreal last verse as the salmon looks for a companion with whom to 'sway together, our tails together, and our fins and minds.'  Maybe it's best to just listen to it.)

When salmon mature they head out to sea, changing their physiology in the estuary to cope with seawater and to become better camouflaged for the ocean, and spend a few years in the seas around Greenland.  Finally, they head back to the river of their birth – their ‘natal river’ – using senses beyond our comprehension.  Sammy says: ‘Most of our friends find their home waters by sense of smell, which is even more keen than that of a dog or a bear.  My family also rely on ocean currents, tides, and the gravitational pull of the moon.’ 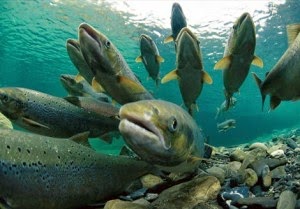 
Neil Young takes over the story with his much more poetic imagining of the salmon’s thoughts:

When the water grew less deep
My fins were aching
from the strain
I'm swimming in my sleep
I know I can't go back again.

They re-adapt to freshwater and struggle upstream to lay their eggs before most die, although some will complete two of these huge cycles.  As Young observes ( And now my fins are in the air, and my belly's scraping on the rocks / And I'll keep swimming till I stop), the huge fish (up to 75cm long) swim literally as far as they can upstream in to tiny becks, before laying their eggs in gravel beds.  It’s during this epic journey that salmon perform their famous ‘leaps’ up waterfalls, powering out of the water over and over again in their attempts to get up to their spawning grounds. 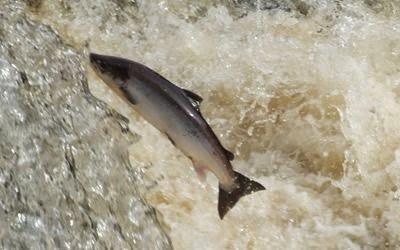 
The past few decades have seen huge declines in salmon and their fellow migrant, the sea-trout, due to overfishing at sea, and pollution and changes in river management inland.  In the south Lakes, the National Trust works in partnership with organisations that are doing great work to improve catchments for migrating fish and other wildlife.  The South Cumbria Rivers Trust and the Coniston and Crake Catchment Partnership promote land management practices that reduce pollution in our local becks, lakes and rivers, and carry out practical work to ‘de-canalise’ waterways that have been straightened and homogenised in the past, in order to allow the development of gravel beds and other natural niches for salmon and all sorts of aquatic life to use.

Weirs and dams have also blocked some migration routes so fish passes are now a common sight on the region’s rivers, allowing salmon and sea trout to bypass the man-made blockages and access their home waters.  Adult salmon undertake their epic migration back to their spawning grounds in the autumn, so if you head to the region’s low waterfalls on the right becks, you might be lucky enough to see salmon on the last leg of their huge journey – you’ll have to do a bit of research and get off the beaten track to pick the right spot!

For a better chance of spotting them, fish passes on the River Kent in Staveley and near Sizergh are hot spots for salmon viewing.  Don’t forget to put some Neil Young or Chemical Brothers on the stereo to learn even more about these amazing fish – you might even find yourself doing the salmon dance…

If you’d like to know more about Lake Windermere and especially the history and ecology of the Claife woodlands, why not join ranger Paul on one of his guided walks as part of the Great British Walk festival? Meet at Ferry House (where the ferry docks) at 2pm on Sunday 14 September, Friday 26 September, Sunday 12 October, or Friday 17 October.
Posted by NT South Lakes Rangers at 13:06
Email ThisBlogThis!Share to TwitterShare to FacebookShare to Pinterest
Labels: becks, Coniston, Coniston Water, Farming Landscapes, Lake District, Lake Windermere, rivers, salmon, Windermere