Before helicopters were involved in upland footpath work, the stone used for building paths was sourced on and around the work site, by hand. This often restricted the size and shape of stone available to pitch with and made the job far more time consuming. This resulted in long periods of work on one path project. 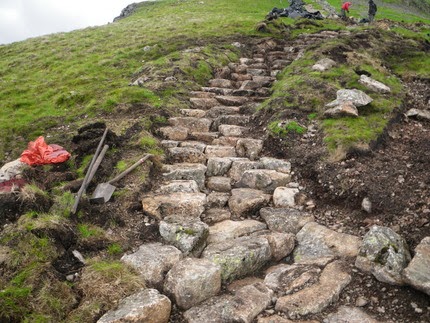 Since then helicopters have played an expensive but crucial role in upland footpath work. The advantages being, stone specific to drains, pitching and landscaping can be chosen to fill the bags. The photo (left) shows a pitched path using stone with a flat surface for stepping on and a drain at the very bottom of the picture with longer deeper stone. The mounds at the sides of the paths have been landscaped with irregular stone to deter people from straying off the path. 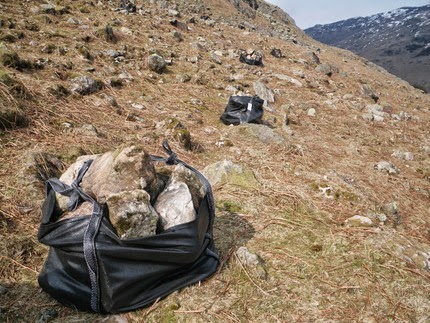 Stone for the bags is collected from stone sites, generally boulder fields below a crag relatively close to the work site. From here the helicopters can ferry the bags across to the work site and place them where they're needed by someone guiding below. 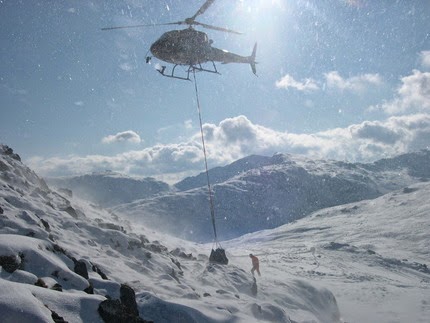 This snowy Heli lift in January of 2002 was to the bad step on Crinkle Crags and Pike o Blisco in the Langdales. On Pike o Blisco the bags were flown to an area of heavy peat erosion between the two peaks of Pike o Blisco. The erosion had been caused by people who were undecided which of the two peaks was the summit. Those that were present when the bags were being dropped off, recall the snow being blown by the helicopter’s down draught felling like sand paper rubbing on their face. 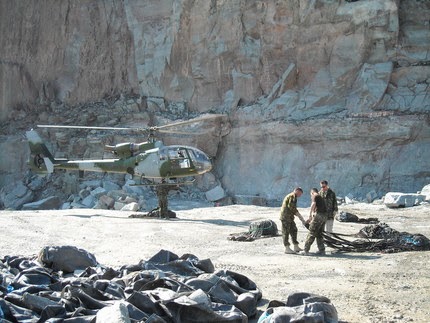 Due the popularity of the path to Wansfell, with easy access from the tourist hub of Ambleside and a great view for a relatively short walk, it receives a lot of footfall. This use gives the path little time to recover and together with path steepness and rainfall the path quickly eroded. In June 2008, we were joined by The Army, as part of their training who used three to four helicopters to lift stone for free from Kirkstone Quarry to Wansfell for work on the path. 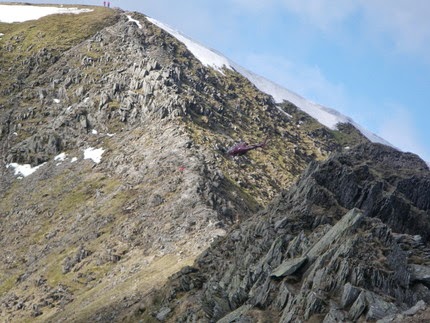 Check out the video link http://youtu.be/mIotAmED2R4  of stone being flown to our main footpath project this year, between Red tarn and Crinkle crags in the Langdales.
Posted by NT South Lakes Rangers at 09:36
Email ThisBlogThis!Share to TwitterShare to FacebookShare to Pinterest