The Crown And The Carnivores

As mentioned in previous blogs, the footpath team's main project of the year has been on the side of Fairfield and as walks home from the work site go, it's pretty special and here's why.  Setting off from high on the ridge we look down on to Grisedale Tarn.  The tarn is apparently 110 feet deep and holds Perch, Brown Trout and Eels.  Legend has it that King Dunmail's crown rests at the bottom of it.  Dunmail was supposedly the last King of Cumbria but in 945AD, he and his army were defeated in battle in the valley between Grasmere and Thirlmere (hence the reason it's now called Dunmail Raise) and he lost his life.  Survivors of the battle carried his crown to Grisedale Tarn and threw it into the depths believing he would rise up again at some point and retrieve his crown.

After walking round the side of the Tarn we also have our daily commute downhill via Raise Beck.  It's a steep walk along a terraced path that traverses along waterfalls and pools. Most of the path is man-made but is difficult to tell because it sits on top of revetment walls which are hidden from view, some of which the team have repaired in previous years.

Points of interest on the Raise Beck path include some of the vegetation that grows to the side of the path.  Sundew is one of them.  This is a carnivorous plant that grows in wet flushes waiting for an unsuspecting insect to land on it.  It coaxes insects in by producing a sticky mucilage that they find irresistible and once they've landed on the leaves they can't get away.  Death is usually by asphyxiation or exhaustion. The mucilage then begins to breakdown the insect and then the resulting 'soup' is taken in by the plant.

Another killer that lurks on the path is the Butterwort.  It grows on the damp bedrock and attracts insects in by forming visible droplets on the leaves.  Once the insect has landed on the leaf and begins to struggle, the more mucilage is produced by the plant, encasing the insect, thus ending the poor creatures life.  The plant is flowering at this time of year and a purple flower is formed on a very long stem.  The reason why the stem is so long is that it hopefully prevents would-be pollinators from getting caught in it's leaves.  Very clever.

The final part of our commute takes us back to the Base which takes us past Coniston Water.  It makes us wonder if this is possibly the best commute in the country?  Probably....... 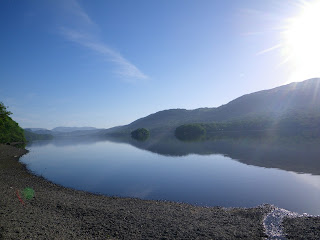 Posted by NT South Lakes Rangers at 10:00
Email ThisBlogThis!Share to TwitterShare to FacebookShare to Pinterest